Putting the brakes on nuisance bikes

Communities blighted by the dangerous, anti-social and illegal use of off-road bikes are being urged to speak out anonymously to help police take them off the streets.

Merseyside’s Police Commissioner works with crime-fighting charity Crimestoppers and Merseyside Police to encourage people to come forward with information about the location of unlicensed and uninsured bikes so they can be seized.

Residents are asked to give information about the use of nuisance bikes and where they are being stored anonymously to Crimestoppers, who are only interested in what information callers have, not who they are. 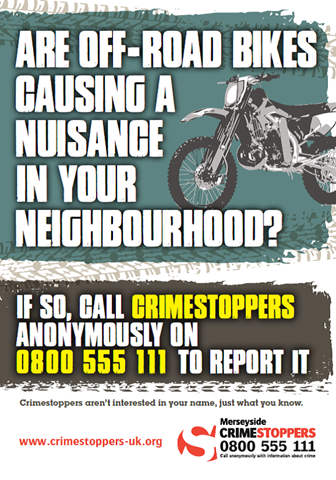 It’s against the law in the UK to ride hoverboards, minibikes (or ‘mini motos’), motorised scooters such as GoPeds on both public roads and pavements. The same applies to ‘trail’ bikes, three-wheeled bikes and quads unless they are displaying valid number plates.

These kind of vehicles may only be used on private roads or land with the road or land-owner’s permission.

While quad bikes, three-wheeled bikes, trail bikes and some other two-wheeled vehicles are built for off-road use, it is against the law to ride them in public parks or on publicly-owned land without permission from the local authority.

As with unlicensed powered vehicles, these can only be used on private roads or land with the road or land-owner’s permission.

Anyone with information about where these bikes are being stored or has any information should contact Crimestoppers anonymously 24/7 on 0800 555 111.

Information can also be passed anonymously through the charity’s website at https://crimestoppers-uk.org