The Commissioner produces an Annual Report each year to inform the public and our partners on the progress that has been made against her Police and Crime Plan.

This report gives both the public and the body which oversees her work, the Police and Crime Panel, the opportunity to review her activities and work and provide their feedback.

These reports cover each financial year. All feedback on the report is welcomed. Please use our Contact page to give us your views.

On 3rd September 2020, Jane released her eighth annual report after it was formally endorsed by the Police and Crime Panel. 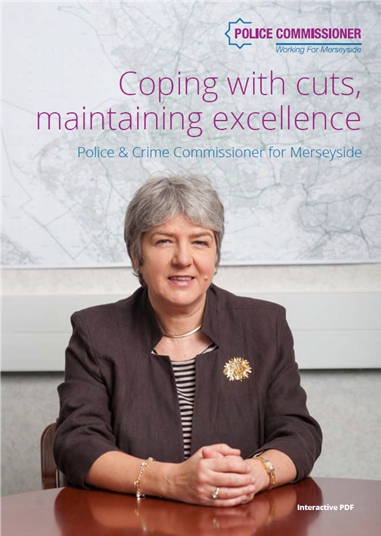 The report entitled ‘Coping with cuts, maintaining excellence’ reflects on Jane’s two terms in office and highlights the challenges faced by the Commissioner and the two Chief Constables she has worked with over the last eight year, as well as the achievements which have ensured Merseyside Police continues to be independently assessed as the best performing urban force in the country.

The report provides an update on the PCC’s work to deliver on her policing priorities over the last 12 months, highlights the progress which on her 10-year estates strategy to improve the force’s stations and facilities and provides case studies on some of the major projects on which the PCC has focussed in the last few years, including the creation of Merseyside’s Violence Reduction Partnership (VRP), the Merseyside Youth Alliance and her Domestic Abuse Workplace scheme.

The 58-page report also demonstrates the efforts the Commissioner has made to engage with the diverse communities of Merseyside, with nearly 60,000 residents being spoken to or attending events with the PCC and her team during the last five years.

The report has been produced as an interactive PDF and includes infographics, diagrams and case studies.

Take a look at the Commissioner's previous Annual Reports by clicking on the links below: