The Police and Crime Commissioner and her office work very closely with Merseyside Police, but they are two separate organisations with different roles.

This means the Chief Constable is responsible for the operational day to day running of the Force. The Commissioner cannot instruct police officers directly. She cannot direct matters to be investigated or order police to take a particular action.

It also makes clear that "the PCC must not fetter the operational independence of the police force and the Chief Constable who leads it".

The PCC holds Merseyside Police to account using a variety of mechanisms.

When the Office of the Police and Crime Commissioner (OPCC) receive correspondence that relates to operational matters it will often be directed to the force, as it will be the officers and staff who have the knowledge and expertise to answer the queries raised.

The Commissioner may also ask for a briefing or explanation from the force.

The Commissioner is responsible for any complaints that relate to the Chief Constable in her personal capacity. All other complaints are sent onto the ‘appropriate authority’, which for most complaints is the Force, but for very serious complaints would be the Independent Office of Police Complaints.

Merseyside Police was formed in 1974 and serves a population of around 1.5 million people, covering an area of 647 square kilometres.

To find out how Merseyside Police is structured, please take a look at a Staffing Structure for the Force.

A day in the life of Merseyside Police

The infographic below gives you an idea of the demands Merseyside Police face on daily basis*: 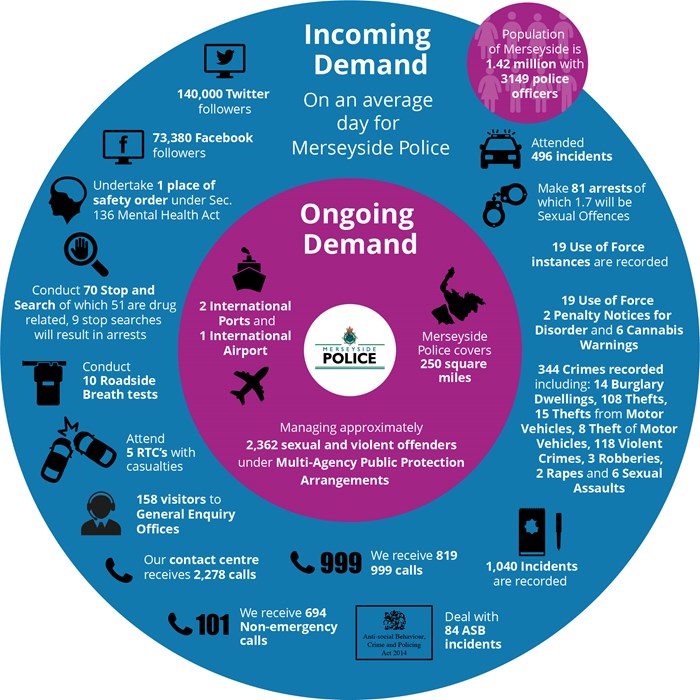 How can we make Merseyside even safer?

Merseyside’s Police Commissioner is asking for your views on how we can make Merseyside even safer.

Emily Spurrell wants you to share your opinions on policing and community safety with her through her Safer Merseyside consultation.

Your views will be the backbone of her spearhead document, Merseyside’s Police and Crime Plan, which will set the policing and community safety priorities for the region for the next three years.