Remembrance of Diana, Princess of Wales and all road crash victims 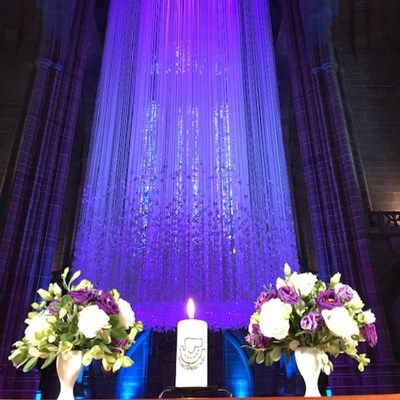 Road crash victims are to be remembered in a special online ceremony filmed in front of the Peace Doves at Liverpool Cathedral.

RoadPeace North West is inviting those who have been bereaved or injured through road crashes, together with those who support them, to an online remembrance event, starting at 2pm on Tuesday 31 August.

The service usually takes place in the Lady Chapel of Liverpool Cathedral but due to the pandemic it will now take place online and will be premiered on RoadPeace’s YouTube Channel.

Canon Philip Anderson, Precentor of Liverpool Cathedral, said: “For many years RoadPeace has met in Liverpool Cathedral to remember and honour those killed on our roads, and to campaign for change. This year the service was recorded in front of the Peace Doves installation, a mass participation artwork created by Peter Walker, gathering thousands of prayers and hopes for peace, written on paper doves, and gathered together like a flock in flight in the cathedral. The display continues until the end of August and all are welcome.”

Lord Mayor of Liverpool, Councillor Mary Rasmussen, who took part, said: “Every road traffic collision has a massive impact, not just on those involved but their wider family and friends, as well as the emergency services and the NHS.

“This service is hugely important in raising awareness of the consequences of road collisions as well as recognising the valuable work of RoadPeace North West in supporting bereaved families and campaigning for better road safety.”

The Chief Constable of Merseyside, Serena Kennedy, who also took part in the service said: “It was truly a privilege to be involved in this service, and I was incredibly moved to meet the families of people who have tragically lost their lives in collisions.

“This annual event allows us the opportunity to pause and reflect on the lives lost to road traffic collisions, and show our support for their loved ones. I want to express my gratitude to RoadPeace for organising the event, and for the vitally important work they do all year round.

“The day of remembrance also serves as a sobering reminder of the devastating impact collisions on our roads have had across Merseyside, and only strengthens our resolve to continue working with partners and the community to reduce the number of people killed and injured on our roads and spare other families such pain.”

Emily Spurrell, Police and Crime Commissioner for Merseyside also took part in the remembrance and said: “Whilst nothing can take away the pain and suffering from losing a loved one in a road crash, RoadPeace’s annual remembrance service is an important opportunity to come together to show our support for the families who have been tragically affected.

“Whilst once again we can’t meet in person, the poignant message of this service is no less important.

“Crucially, it reminds us of our shared responsibility to work together to prevent other families from enduring the same loss in the future.

The remembrance takes place on the 24th anniversary of the death of Diana, Princess of Wales in a road crash and will include photographs and tributes to loved ones who have died.

Britain's first road death also occurred in August, when Bridget Driscoll was killed at Crystal Palace on August 17th 1896, with the Coroner pronouncing: “This must never happen again”.

Since then, over half a million people have been killed in crashes in Britain and the current annual global death toll is estimated at 1.35 million deaths.

In the UK, provisional results from the Department for Transport show 1,472 people were killed and there were 115,333 casualties in 2020. Such scale of loss has been described by Professor Danny Dorling, a patron of RoadPeace, as this century's biggest public health crisis with our roads “the open sewers of the 21st century”.

Pauline Fielding, a trustee of RoadPeace and event organiser, believes remembrance plays a vital role in reminding society about the number of victims and highlighting the long term psychological impact on those bereaved and injured in road crashes. She said: “My son Andrew was killed in a road crash, caused by a driver who did not stop and who was never traced.

“Since that day, 27 years ago, I have been fighting for justice for him and to reduce dangers on the road where he died, to help prevent others also experiencing the loss of a loved one. The day Andrew died changed my life and that of so many others. I was helped emotionally and practically by RoadPeace and so I urge all those bereaved or injured by road crashes, together with those who support us, to join us in remembering our loved ones and in raising awareness to help prevent further death and injury.

“We are thankful to the emergency services, all those who support us and to those who are working hard to reduce the number of people killed or injured on our roads.”

If you have been affected by a crash and would like to speak to RoadPeace’s support team, the helpline number is 0845 450 0355. You can find out more about the organisation by visiting www.roadpeace.org.