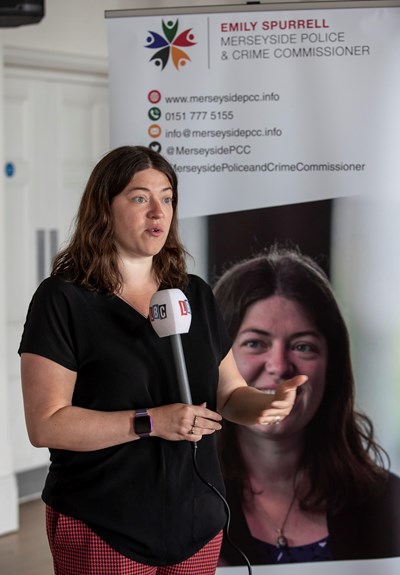 Merseyside’s Police Commissioner Emily Spurrell is joining Labour representatives across local, regional and national government today to release a new report showcasing the bold, ambitious and radical change that Labour in power is delivering across Britain.

Stronger Together: Labour Works, released on the eve of Labour Party conference, brings together examples of the practical and ambitious work by Labour to build a fairer, greener and more secure future for the country.

The report includes an essay by the Police Commissioner, Emily Spurrell detailing how Labour works for Merseyside. It showcases her work to tackle the epidemic of Violence against Women and Girls and her plans for making the region even safer.

The report is one of two released today as part of the first phase of ‘Stronger Together: A Better Future for Britain’ – the roadmap to develop key policies ahead of the next General Election announced by Labour leader Keir Starmer MP in May and headed by Party Chair Anneliese Dodds.

The second report – Stronger Together: Britain in 2030 – looks at the six big challenges facing Britain over the coming decade, and how Labour can start to face up to them. It also outlines the risks if the Conservatives remain in power and duck these key challenges, which include:

It makes clear that Britain simply cannot afford more years of the Conservatives and their ‘sink or swim’ mentality – and that only Labour can rally the country together to deliver the change it needs.

The publication of these two reports follows the release of Labour leader Keir Starmer’s vision for a ‘contribution society’ to provide security and opportunity to working people across the country.

Anneliese Dodds MP, Chair of Stronger Together, said: “Wherever Labour is in power, lives change for the better.

“Whether the focus is our Labour-run local authorities, our eight Metropolitan Mayors, our Police and Crime Commissioners or the Labour Government in Wales, Stronger Together: Labour Works shows we are making a difference in power right now, right across the UK.

“The way Britain responded to the pandemic proved that we’re stronger together. As we look ahead to the coming decade, Labour wants to harness that spirit to start building a better future for everyone.

“Stronger Together: Britain in 2030 shows that our country is at a crossroads. We can go back to the same, insecure, unfair economy that the Conservatives have created. Or we can choose a path to a greener, fairer and more secure Britain under Labour.

“Only Labour can take on the challenges of the post-crisis world to build a future that everyone in Britain can be proud of. We’ve done it before. Together, we can do it again.”

Merseyside’s Labour Police Commissioner Emily Spurrell said: “For far too long Merseyside has been left behind by this Conservative government. Under-funded and neglected.

“Our police service has still not recovered from a decade of austerity and our local authorities saw some of the highest cuts in funding per person. Cuts to mental health and youth services, community centres housing and education have all taken their toll.

“This region knows that it is only Labour which will build a better future for everyone. That’s why they’ve put their faith in a Labour Metro Mayor, a Labour Police Commissioner and five Labour-run Councils, who are working day in day out to make life better for our communities.

“I am proud to be the public’s voice on policing and community safety. I was elected on a promise to fight for our region and get it the funding we deserve and that’s what I’ve been working hard to do during my first four months in post.

“Stronger Together: A Better Future for Britain shows how Labour in power is making a difference here in Merseyside and right across the country.

“And it sets out Labour’s bold, ambitious plan to address the challenges of the next decade and deliver the change this country so desperately needs.”