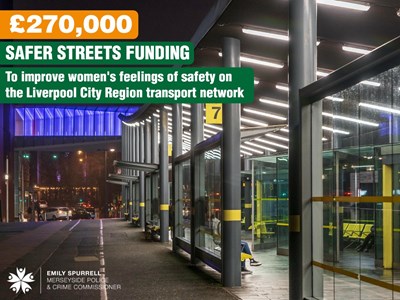 Nearly £270,000 of new funding has been secured by Merseyside’s Police Commissioner to invest in making women feel safer on the Liverpool City Region transport network.

Emily Spurrell has been awarded the money from the Government’s Safer Streets Fund after working with Liverpool City Council and the TravelSafe Partnership on a joint bid focused on addressing women’s fears about travelling in and out of the city centre, particularly at night.

The bid follows a survey, run by the Police Commissioner, which showed 54% of women felt unsafe using public transport in Merseyside at night and nearly 42% had concerns about using it in the day.

The new funding will be used to improve CCTV coverage particularly at city centre bus stations in Liverpool One, Queens Square and Sir Thomas Street, create new ‘help points’ connected to the CityWatch control room and better links with emergency services. Travel centres at each of the bus stations will also become ‘safe spaces’ for anyone who feels vulnerable.

Bus drivers, frontline bus station staff and taxi drivers will receive ‘bystander training’ to better understand and know how to prevent sexual violence. The training will equip them to act as ‘guardians’, to make passengers feel safer.

The money will also be used to launch a text message service, specifically requested by young people, which can be used to report concerns and help to identify offenders. It will also fund a new educational resource for up to 70 schools across Liverpool raising awareness of sexual harassment and misogyny.

The funding will also be used to provide an increased police and uniformed presence on the transport network through monthly awareness days at transport hubs, partnership days and use of the mobile police unit in hotspot areas and at times when women feel most unsafe. Merseyside Fire and Rescue Service will also support the campaign by directing their fire engines back from emergencies along any area identified as having a problem through the text message service to provide additional reassurance.

All this work will be supported by the launch of a new communications campaign which will highlight the work being carried out to make the network safer and increase awareness of the ways to report any concerns.

Merseyside’s Police Commissioner Emily Spurrell said: “More than 1,500 women across Merseyside responding to my public survey about their feelings of safety. Their responses highlighted that more women feel unsafe using public transport at night than any other area or location in our region.

“No-one should feel too worried or scared to use our public transport network. We listened intently to their voices and this bid was developed specifically to respond to their concerns.

“With this funding we will be able to put some significant, long-term improvements in place relatively quickly that I hope will make a genuine difference. We want women to feel safe using the transport network and ensure if any incident does occur that causes them concern that they can report it quickly and easily and there is someone on hand who is trained to respond effectively.

“My thanks go to all the partners who have worked to put this bid together. Our aim must be to ensure everyone can feel confident travelling in and out of our city centre. While this won’t solve the fundamental issue of male violence against women and girls, I hope this major new investment will help women to be safer and feel safer.”

Steve Rotheram, Mayor of the Liverpool City Region, said: “The murder of Sarah Everard sent shockwaves throughout the country and sparked an important national debate about the safety of women and girls in public places. Whether using public transport at night, going out on a run or just walking home – too often women feel they are unable to do things men take for granted due to the risk to their safety.

“In this country there is an epidemic of violence against women, with men the main perpetrators. Two women a week are killed by their partners, one in four experience domestic abuse, and countless women feel unsafe simply walking down the street.

“I’ll be working with the Merseyside Police, the PCC and others to make public transport – and our streets – the safest possible place for women.”

Liverpool City Council’s Cabinet member for Neighbourhoods, Cllr Abdul Qadir, said: “Everyone should feel safe on our public transport network and it is of great concern that a large proportion of women do not.

“This funding is a step in the right direction in addressing their concerns and putting in place practical measures that will raise awareness among transport staff, improve CCTV and make it easier to report concerns.

“This is really important, particularly given the shocking murder of Sarah Everard which has troubled us all.”

Merseyside Police’s Superintendent Diane Pownall said: “We welcome this investment, which will enable us to do even more work to protect women and girls travelling to and from Liverpool.

“We recognise that this is an issue that requires a number of organisations working together, and I look forward to linking up more with all involved.

“Crucially, it empowers the public to tell us where and when they feel unsafe so that we can, alongside partners, take practical steps to address those fears, allay concerns and ultimately ensure women and girls are safe in Liverpool.”

The Safer Streets Fund first opened for bids in January 2020 with the objective of tackling acquisitive crime in hotspot areas. Merseyside has already successfully secured three rounds of funding to tackle issues in two areas of Birkenhead and in Kirkdale in North Liverpool.

The third round of funding, totalling £23.5m, was launched in June with a specific emphasis on projects focused on improving the safety of women and girls. Bids were evaluated against a set criteria and Police Commissioners were asked to outline a plan to reduce crime within a local crime hotspot, demonstrating value for money, evidence of community engagement and long-term sustainability.