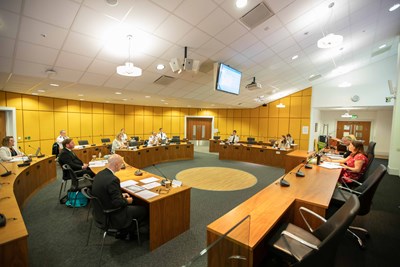 Emily Spurrell is responsible for holding the Chief Constable, Serena Kennedy, to account for delivering on her policing and community safety priorities and maintaining an efficient and effective police service in Merseyside.

One of the ways the Police Commissioner undertakes this crucial role is through quarterly public Scrutiny Meetings, which include questions from the public and are live-streamed to enable everyone to watch.

This meeting will focus on Pillar 1 of the PCC's Police and Crime Plan - Fighting Crime; Proactive Policing. It will cover the force’s performance on crucial issues, including how the force works to prevent and tackle serious and organised crime, as well as business crime and fraud and cyber crime. It will also examine the way Merseyside Police delivers visible and accessible local policing, acquisitive crime such as burglary and robbery and road safety.

The meeting will provide Chief Officers with the opportunity to give the Commissioner a detailed account of the force’s progress into how they address these issues, work to bring perpetrators to justice and make our communities safer, enabling Emily to identify if there are any areas of risk.

The three-hour meeting, which will be held at the Liverpool City Region Combined Authority chamber in Mann Island, will be recorded so members of the public can review it at any time.

A link to watch this meeting live will be available here shortly. The agenda and presentation for this meeting will also be released at least five days in advance.