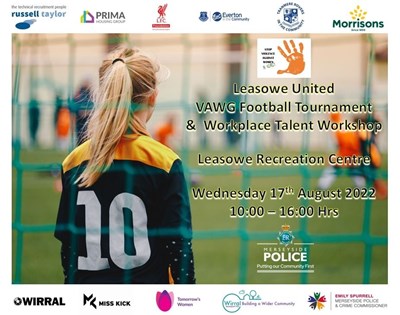 Merseyside Police and the Russell Taylor Group are teaming up to launch a major new initiative to kickstart the employment hopes and dreams of girls on the Wirral.

As part of the innovative Leasowe United Community Day, Merseyside Police’s Wirral Community Team will be working alongside the Russell Taylor Group as they put girls and young women at the forefront of a campaign to divert them into further education, apprenticeships and employment.

Operating from the event’s ‘Talent Tent’, technical recruitment company Russell Taylor Group is partnering up with local training providers and community groups where they will introduce young women living on the Leasowe estate to life-changing opportunities and inspire them to take their first career steps into the world of work.

Top sporting action will also form part of the Leasowe United project as around 150 young sportswomen, aged between 12 and 17, from all over Wirral compete in an all-female football tournament, designed to build their confidence and realise their potential both on and off the pitch.

The Leasowe United project has evolved from work by Constable Alison Inman and Constable Claire Ryan from Merseyside Police’s Wirral Community Team with the aim of creating safer communities and greater opportunities for those who live and work in them.

Merseyside’s Police Commissioner Emily Spurrell said: “We know football is a fantastic way to engage and inspire young people and for young women the time has never better given the huge excitement around the women’s game right now.

“This community day is designed to offer young women across the Wirral a fantastic sporting opportunity, while also giving them access to education, training and job opportunities which may change their lives for the better.

“Our goal is to open doors for these young women to help them to reach their full potential and expand their horizons beyond what they may have thought possible.”

Merseyside Police Chief Constable Serena Kennedy said: “Merseyside Police is committed to working with our partners and communities and Leasowe United is a great example of what can be achieved when working together.

“Initiatives like this that offer our young people an opportunity to bring all their potential to the fore are so important. I hope this inspires them to embrace new challenges and to take the steps to further education or into the world of work.”

Police Constable Alison Inman, part of the Wallasey-based Local Policing team, said: “The football tournament will prove how much sporting talent there is among local girls - so many role models are out there, particularly now that there’s a huge focus on the success of the Lionesses in the Women's Euro Championship. The ‘Talent Tent is designed to inspire them by taking part in workshops, introducing them to successful women in business and give them an insight into careers, apprenticeships and development.

“So many life-changing chances are awaiting these young women and our community partnership with Russell Taylor Group will give them confidence to take on new challenges which will hopefully open many doors for them.”

Peter Russell, chairman of Russell Taylor Group, which is acting as main sponsor of Leasowe United, said: “As someone who was born in Birkenhead and worked in Moreton for nearly 20 years, I’ve spent all my life helping to guide young people - particularly those who are vulnerable or with special needs - to raise their aspirations and to develop themselves and their careers. So I was really excited when Merseyside Police asked our business and our partners to get involved in this event.

“Its aim is to leave a legacy of hope for young women in the area, making it so much more than a sporting event. So, with this in mind, we set up a support team of coaches, inspirational achievers and employment recruiters to be there on the day with workshops and one-to-one advice for all those who want to kick-start or reshape their careers - to really make a difference to young lives.”