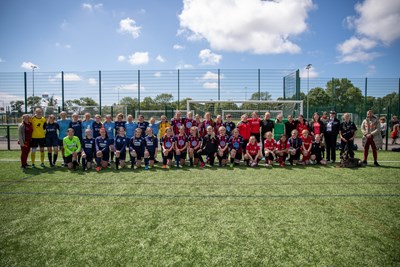 More than 90 young women from across Merseyside competed in the final of the ‘She Inspires’ football tournament hosted by the region’s Police’s Commissioner and Chief Constable and a squad of top sporting partners yesterday (Sunday 3rd July).

Eight teams came together from all over Merseyside to compete in the tournament’s first ever final at the Jeffery Humble playing fields in Aintree.

The final was the culmination of a two-month project which saw approximately 120 girls, aged between 15 and 18, from areas where diversionary activities would have the biggest impact receive free training sessions from Liverpool County FA, LFC Foundation and Everton in the Community.

As well as gaining skills on the pitch, the young women had the chance to earn accredited FA qualifications and further education via the Fowler Education Football Academy, LFC Foundation Sports Works employability programme and Everton Football College.

Merseyside Police Commissioner Emily Spurrell: “It was brilliant to see so many young women coming together today for the ‘She Inspires’ project.

“Football is a fantastic way to engage and inspire young women and I’m proud to have supported this project, giving young women across our region the opportunity to work as a team, develop leadership skills and gain qualifications to help them reach their full potential.”

“I was delighted to be able to present the awards to the winners of the tournament and see how far all the young women have come since taking part in the project. My congratulations to all involved, especially the winners at Liverpool Feds White, and a big thanks to Liverpool County FA, the coaching staff at Everton in the Community and Liverpool FC Foundation, and all our partners for supporting this event.”

Merseyside’s Police’s Violence against Women and Girls (VAWG) lead Chief Superintendent Ngaire Waine said: “It was my privilege to attend on Sunday and get to watch these talented young women put so much passion into something they enjoy. Their enthusiasm and focus on the pitch was inspiring to watch. Initiatives like this that offer our young people an opportunity to bring all their potential to the fore are so important.

“Merseyside Police is committed to working with our partners and communities and the ‘She Inspires’ initiative will ensure that girls who take part build their confidence and realise their potential both on and off the pitch. 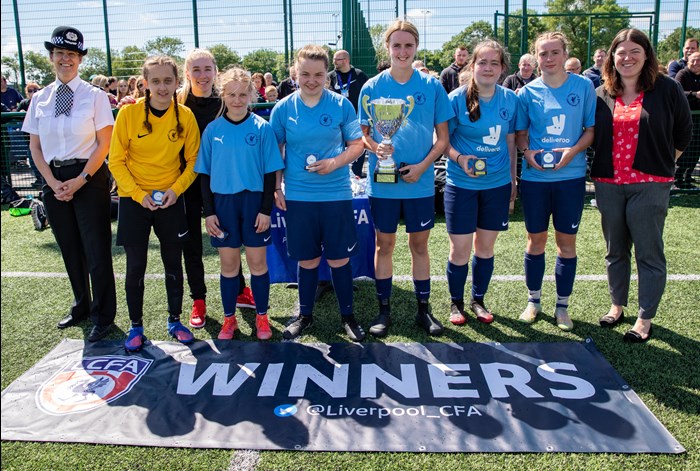 “This has been a great example of the good that comes of working closely with our community partners.  Football clubs, colleges, blue light services, local facilities - all coming together to create a unique opportunity for Merseyside girls.”

A spokesperson from the winners, Liverpool Feds White said: “It was an inclusive and enjoyable tournament with some good football and great attitudes to the game on show. The players value the opportunities to complete some coaching and referee courses as many want to continue in the game in many different ways.”

A spokesperson for the runners up Hesketh Colt Blues added: “It is always great to see the women's game growing and the aspirations of female football being taken seriously. It’s great to see more organisations getting involved and backing the opportunities in the sport for the early development stages in girls football, followed by evolving pathways into the sport and related professions for the women's game.

“The tournament was well run and our Hesketh Colts girls enjoyed the whole day. Hopefully this will go each year from strength to strength, helping grow the opportunities with women's football.”

Liverpool County FA, LFC Foundation and Everton in The Community worked with the Police and Crime Commissioner’s office, Merseyside Police and Merseyside Violence Reduction Partnership to provide resources and time to facilitate the girls coaching in a strong show of Merseyside communities and groups coming together for the benefit of young people.

Detective Superintendent Siobhan Gainer, Head of the Merseyside Violence Reduction Partnership, said: “As with our other ongoing culture, media, and sport programmes, She Inspires has offered young people opportunities to grow, be healthy and progress and be away from any potential toxic influences.

“I think it has also exposed them to positive female role models, personified of course by the tournament’s founders, the Police and Crime Commissioner for Merseyside and the Chief Constable.”

Anna Farrell, Football Development Officer at Liverpool County FA: “Football brings people together and can be used to break down barriers and create positive relationships and experiences.

“The girls involved in this programme, have all experienced weekly fun and inspiring coaching sessions. They now have the opportunity to develop as football players, referees, coaches and now know what Further Educational opportunities and support are available to them as well as careers in Merseyside Police and Merseyside Fire & Rescue Service. By working collaboratively for the first time, we have inspired this group of girls and we aim for this to continue.”

LFC Foundation CEO Matt Parish said: “The LFC Foundation is proud that we have been part of this partnership with EitC, LCFA, the PCC, the Chief Constable and Merseyside VRU to deliver this programme for young women in Merseyside.

“It is hoped that the participants will have increased their confidence and self-esteem and in doing so their resilience and ability to resist getting drawn into risk taking behaviour and unhealthy relationships.”

The event was also used to host the 11 v 11 Sefton under-16 girls League Cup Final between Crosby Stuart Girls and Rainford Ladies, with Rainford being crowned as winners.

Rainford Ladies FC coach Darren Drury said: “Our girls had the best Cup Final Day. From our mascots to players, to parents and spectators, it was enjoyed by all. A day to remember. Thank you to all involved.”