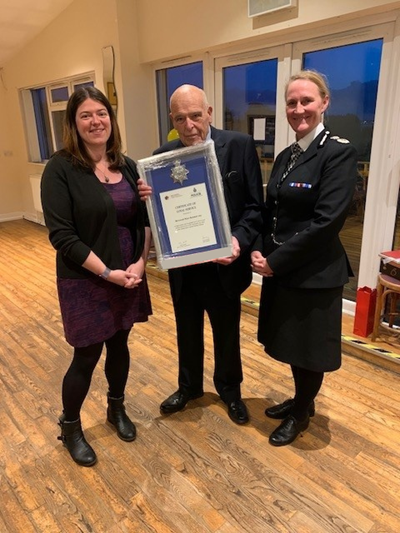 PCC Emily Spurrell is sad to announce the death of Reverend Peter W. Beaman MBE, who passed away earlier this week.

In response to the news of Rev. Beaman's passing, the Police and Crime Commissioner has said: "It was with great sadness that I learned of the death of Reverend Peter Beaman, who served as chair of Merseyside’s Independent Custody Visiting Scheme for a phenomenal 37 years before his retirement in October."

"Peter joined the scheme when it was first established in 1984 under the previous Police Authority and spent many countless hours driving to police stations in all weathers and at all times, to look around the cells and meet those people detained. Peter’s work was vital to ensure detainees are being treated lawfully, with care and dignity, and determining whether the regulations governing detention have been complied with and the interests of detainees have been properly considered."

"Peter’s legacy will continue as he pioneered many changes which have improved custody procedures. His efforts have propelled change and led to many positive developments for the welfare of detainees including the provision of water dispensers in all custody suites, wool blankets being replaced in favour of safety blankets to prevent detainees self-harming and pioneering a project with the charity ‘Give a Book’ to ensure appropriate reading material is available in all custody suites to reduce stress, agitation, and boredom of detainees."

"My thoughts are with Peter’s wife Marion, his family and friends at this incredibly difficult time."

Current Chair of Merseyside’s Independent Custody Visiting Scheme Ruth Rogers said: "I feel so sad to be writing about Peter Beaman in the past tense. He had a remarkable life force and there was no way he was letting a range of ailments, age or retirement  stop him from doing what he most enjoyed -making life better for people. And in the process enjoying himself with his family, friends and colleagues."

"He had been a custody visitor since the scheme started and believed in justice and decent treatment for all. That meant not just the detainees but also other custody visitors and the staff and officers who worked in custody. He maintained friendships with so many people he had worked with over the years, including me and we always knew that he was willing to listen and support and tell us his anecdotes. If we needed a friendly face, he was there."

"It was a privilege to have worked with him and know he counted me as a friend and I am glad that we managed to have lunch together not too long ago. I shall think about him often and be grateful."