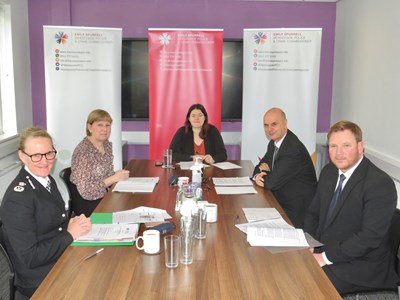 Merseyside’s Police Commissioner has set and approved a budget which will allow Merseyside Police to continue to rebuild during 2022/23.

The Commissioner, Emily Spurrell, held a special public budget meeting with the Chief Constable Serena Kennedy at her offices on Mather Avenue today at which the financial plans for the year ahead were consider and approved.

Over the last two years, the Commissioner and the Chief Constable have accelerated the force’s recruitment drive to bring 665 new police officers into the force – well ahead of Government targets.

By setting a balanced budget for the next 12 months, the Commissioner and Chief Constable will be able to maintain those new officers and protect police staff and PCSO jobs, while putting the force in the strongest possible position for the year ahead.

In order to balance the budget, the force have will need to make a further £3m of cuts during the next 12 months. The budget also includes a small increase to the police ‘precept’ – the part of local Council Tax ring-fenced for local policing.

This came after the Government announced last December they were expecting Police and Crime Commissioners to raise the precept to generate funds for their local police service. The Commissioner took this proposal to local people during a three-week consultation, with 59% of respondents and the region’s Police and Crime Panel giving their support.

Merseyside’s Police Commissioner Emily Spurrell said: “After a decade of austerity, one of my main priorities is to help Merseyside Police rebuild and grow and that is exactly what this budget does.

“By setting a balanced budget for the year ahead, Merseyside Police can maintain the 665 new police officers we have recruited in the last two years, while also protecting staff and PCSO jobs.

“While I was very reluctant to ask  taxpayers to contribute a little extra to support their police service, I’m grateful to have had the support of local people through my consultation and the Police and Crime Panel to protect our police service.

“There are still significant challenges ahead – this budget includes £3m of cuts to be made in the next 12 months and we predict a further £13.7m of savings will have to be found by 2026/27.

“Merseyside Police is also still 456 officers short of the officers it had back in 2010.

“I am focused on doing everything possible to help Merseyside Police to go back to its former strength. I will continue to lobby Ministers at every chance I get to provide the funding for those missing officers, and I will also work to secure extra grants and funding for our region wherever I can.

“With all the challenges ahead, setting a balanced budget has been no easy task, but by doing so we have put Merseyside Police in the best possible position to keep our communities safe in the year ahead.”