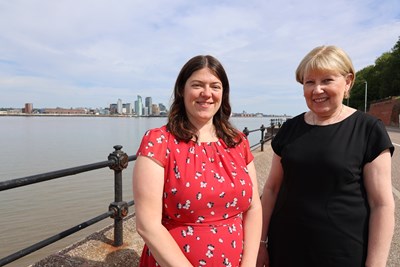 Merseyside’s Police Commissioner has announced the appointment of a permanent Chief Executive, following confirmation by the Police and Crime Panel.

Sue, who has been acting as interim Chief Executive since September 2021, was selected following an open recruitment process.

This involved an interview panel which included the Chief Executive of the Association of Police and Crime Commissioners, Susannah Hancock, and the Chief of the Joint Audit Committee, David Evans, and was observed by a member of the Police and Crime Panel.

A confirmation hearing by the Police and Crime Panel, the body which scrutinises the Commissioner’s work, was held yesterday with members unanimously approving the appointment.

Sue has more than 30 years’ experience working within the policing and criminal justice sector. Before taking up the role of interim Chief Executive she was the Programme Director for a collaboration project between Merseyside, Cheshire, North Wales, and Dyfed Powys police forces looking to streamline processes and drive efficiencies.

Her previous roles also include acting Head of Criminal Justice within Merseyside Police and Chair of the Merseyside Road Safety Partnership. She was awarded an MBE in 2011 for her services to policing, specifically victims and witnesses.

Sue, who has a Masters in Police Leadership from Liverpool Hope University, also headed up the Office of the Police and Crime Commissioner in North Wales between 2017 and 2018.

Merseyside’s Police Commissioner Emily Spurrell said: “I am pleased the Panel has confirmed my decision to appoint Sue to the to the role of Chief Executive and Monitoring Officer on a permanent basis.

“Sue has very quickly got to grips with the role during her time as interim Chief Executive, demonstrating a strong understanding of the demands and requirements of the position and the office and a drive to deliver excellence for communities across our region.

“Sue is an extremely committed public servant who has already dedicated more than 30 years to serving the people of Merseyside and has been honoured with an MBE for her work supporting victims and witnesses.

“She is hugely knowledgeable about the policing and criminal justice landscape in the region, has a wealth of experience at leading change and collaborating with partners, and understands the challenges facing our police service going forward.

“I have no doubt Sue will do a fantastic job leading my office and I look forward to working with her to deliver my vision for policing and crime prevention services to make Merseyside an even safer place to live, work and visit.”

Sue said: “I’m delighted the Commissioner has selected me to take up this position permanently and this decision has been confirmed by the Panel.

“This is a challenging, busy and exciting time for policing on Merseyside. I’m honoured to have been appointed to lead the Commissioner’s team to help deliver her strategic vision for policing and community safety, ensuring her priorities are delivered and her office is providing the best possible service to the public of Merseyside.

“The safety of our families and communities is of utmost importance to us all, so, it is a privilege to take up this role working with the Commissioner, Merseyside Police and our partners.”

Sue, who was Chair of Merseyside Police’s gender equality network, joined the force in 1989 as a Communications Officer in the police control room before moving on to manage the Police National Computer (PNC) Bureau. In 1999, she became a unit manager in Criminal Justice and went on to work her way up through the department to manage 600 staff within the organisation.

In a letter unanimously approving the appointment, the Chair of the Police and Crime Panel, Cllr Barbara Murray praised both Sue and the transparency of the recruitment process.

Cllr Murray wrote: “Panel Members were particularly impressed with the manner that Sue responded to our questioning, demonstrating that she was a professional, personable and knowledgeable candidate.

“In addition, the Panel wished to place on record its satisfaction with the openness and transparency of the recruitment process carried out for this position.”

Under the Police Reform and Social Responsibility Act 2011 the PCC must have a Chief Executive and a Chief Financial Officer. These are statutory roles within her office, with the Chief Executive also acting as the Monitoring Officer.