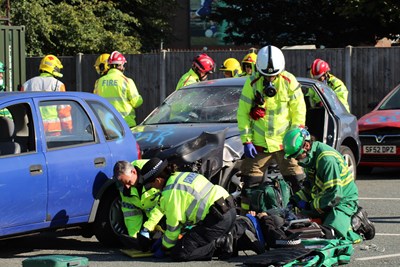 Merseyside’s Police Commissioner has today welcomed plans to double the maximum jail sentence for those who attack emergency workers.

The proposal to increase the maximum sentences for violent offences against ‘bluelight’ workers from 12 months to two years in England and Wales has been put forward by the Government for consultation.

It follows a surge in assaults against police officers and NHS workers during the coronavirus lockdown, even as other crimes have fallen. Nationally, assaults on emergency service workers were 24% higher in the four weeks running up to June 7, compared to the same time period in 2019.

The proposal, which is now subject to a four-week review, comes just two years after the Assault on Emergency Workers (Offences) Act was introduced, doubling the maximum sentence from six to 12 months.

The region’s Police Commissioner, Jane Kennedy, has today welcomed the proposal, but highlighted that more of a deterrent sentence should have been set when the law was changed in 2018.

Jane said: “Police officers, firefighters and NHS staff strive to protect people and to keep our communities safe from harm. They are the people who run towards danger, when the rest of us run away from it. They are supported and appreciated by the vast majority of ordinary, decent people, and they must be defended when a small minority subject them to threats, violence and abuse for doing this vital work.

“This proposal is another step in the right direction in ensuring emergency service workers get the protection they deserve, but it is frustrating that a genuine deterrent sentence was not imposed originally. The Government had ample opportunity to send out a powerful message to would-be offenders when they changed the law back in 2018. However, I welcome the fact that Ministers have listened and proposed this change.

“Those in the frontline of these essential services need to know that an individual who commits a completely unacceptable attack on an emergency service worker will face the full force of the law and receive a sentence that could be measured in years, rather than days or weeks.”