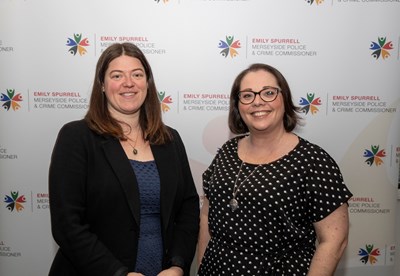 The new Deputy Police Commissioner for Merseyside has spoken of her commitment to building stronger, safer communities across the region.

Councillor Jeanie Bell made the vow after her appointment as Deputy was confirmed by the region’s Police and Crime Panel.

Members of the Panel, which has responsibility for scrutinising the Commissioner’s work, had the opportunity to question Cllr Bell and assess her suitability for the role.

The Panel formally notified the Commissioner that they support her decision to appoint Cllr Bell, who will take up the role three days a week.

Cllr Bell, who is currently Cabinet Member for Community Safety in St Helens, will now work alongside the Police Commissioner Emily Spurrell supporting her to deliver her vision and priorities for the region, deputising for her when necessary.

The Newton-le-Willows Councillor was chosen as the Police Commissioner’s preferred candidate following an open selection process, which saw 14 people apply for the part-time position and four people offered interviews.

PCC Emily Spurrell said: “I’m grateful to the Police and Crime Panel for supporting my appointment of Jeanie as Deputy.

“I have no doubt she has the experience, enthusiasm, and drive to do a fantastic job on behalf of our communities as Deputy. I am very much looking forward to her starting in post so we can work together on the priorities I’ve set for the region on behalf of local people.”

The new Deputy Police and Crime Commissioner, Cllr Bell said: “I would like to thank the Panel for confirming me as Deputy Police and Crime Commissioner. I can’t wait to get started - visiting communities across this brilliant region to listen to their concerns to ensure I can be a loud voice on their behalf and redouble our efforts to make our communities even safer.

“Emily’s vision and values really align with mine and I am excited to be working on the priorities she set out in her Police and Crime which I wholeheartedly share – fighting crime, building stronger communities, protecting the vulnerable and supporting victims. I am committed to working alongside her to build stronger, safer communities across Merseyside.”

Cllr Bell, who is currently head of Criminal Justice at The Brain Charity, has served as St Helens Cabinet Member for Community Safety since May 2019. She is also the Local Government Association Licensing Champion, having previously served as the Council’s Chair of Licensing, as well as Cabinet Member for Public Health, Libraries and Leisure.

Prior to being elected eight years ago, Cllr Bell was a curriculum leader and lecturer in public services at St Helens College, as well as being a key worker for young people aged 14-16 who were not in education, employment or training. She has also worked in secure hospitals for offenders and Young Offenders’ Institutes.

She was selected following a transparent interview process carried out by the Commissioner, her Chief Executive, Susan McTaggart MBE and Leader of Knowsley Council Cllr Graham Morgan, and independently observed by a member of the Police and Crime Panel.

Cllr Bell will join the Commissioner’s office on a fixed term contract, working three days a week for a salary of £33,537 per annum.