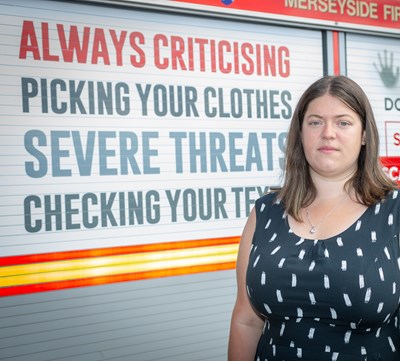 The report, released by Her Majesty’s Inspectorate of Constabulary and Fire and Rescue Services (HMICFRS), details that there is an ‘epidemic of violence’ against women and girls and that a whole-system approach is needed to make fundamental change.

The inspectorate highlighted that while vast improvements have been made by the police in their response to Violence against Women and Girls (VAWG) over the past decade, reform across many sectors – including policing, health and education – is vital if  things are to change.

The report, which was commissioned by the Home Secretary, will inform the Government’s VAWG strategy, and follows an interim report published in July.

Emily said: “This hard-hitting report sets  out in unequivocal terms what we have known for a long time - that there is an epidemic of violence facing women in our society and that radical action is urgently needed if we are to protect them and make their lives safer.

“Lots of organisations, including Merseyside Police, have already made progress in responding to these crimes, but we know there is still much that can be done to ensure every woman gets the right response, every time.

“I am committed to working with partners here in Merseyside to make a difference. I am already looking to recruit a VAWG lead who will help with the creation of a region-wide strategy and spearhead a taskforce. I am also reviewing the way support services are funded locally.

“However, as inspectors have stressed in the strongest possible terms, we need fundamental system-wide change right from the top to drive a bold shift in thinking.

“The Home Secretary commissioned this report. The findings could not be clearer, so it is now time for her to take action.

“An important first step would be for this government to start treating VAWG as an absolute priority by immediately adding it to the Strategic Policing Requirement (SPR) and include domestic abuse in the definition of serious violence. This would recognise the threat these crimes pose and elevate it is as priority, ensuring sufficient resources and capacity are allocated to tackling it.

“This report must drive the development of the Government’s new VAWG strategy – a strategy which needs to cross across many different sectors, including policing and the criminal justice system, but also health, education, social care and community safety.

“It must also focus on joining up everyone’s efforts to ensure best practice is used consistently by all organisations and provide a framework to assess the response.

“Crucially, if any national strategy is to make a genuine difference, it must be backed up by sustained, appropriate funding.

“The Government cannot tackle this crisis on the cheap. They must commit sufficient funding so all the agencies are able to respond effectively.

“The issue of VAWG is deep-rooted and embedded, but the Government must not wait any longer to address it. While they waste time, more women are suffering.”

To inform the report, HMICFRS reviewed evidence from previous inspections, consulted with experts from policing, government and victim support organisations, and analysed the progress made by the police. They also gathered the first-hand accounts of victims and practitioners and carried out fieldwork in four forces – Avon and Somerset, Cheshire, Surrey and Humberside.

Her Majesty’s Inspector of Constabulary Zoë Billingham said: “We have a once in a generation opportunity to permanently uproot violence against women and girls, which is now epidemic in this country. The police have vastly improved how they respond to these crimes, and I welcome the appointment of a national policing lead for VAWG to coordinate this work.

“We’ve set out practical changes for the police to make now, but they cannot solve this alone. That is why we’re taking the unusual step of recommending a radical change of approach across the whole system, involving the police, criminal justice system, local authorities, health and education.

“We have suggested a new framework – with mandated responsibilities and sufficient funding – that requires all these partners to work together to support victims and prevent VAWG from happening in the first place.

“I am grateful to the Home Secretary for commissioning this inspection. It has allowed us to set out a way forward which, if acted on, will give women and girls the confidence that there is not only the will but also the power to end this epidemic.”