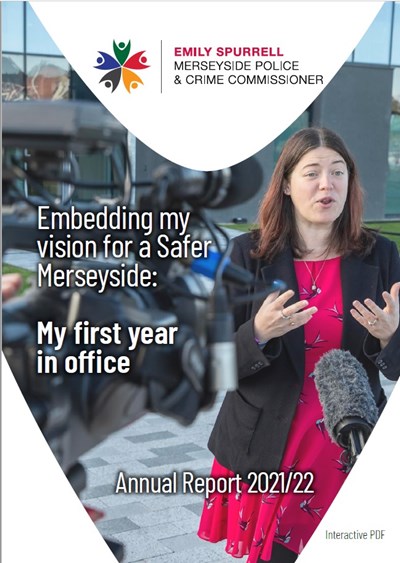 Merseyside’s Police Commissioner has reflected on the achievements and challenges of her first year in office as she releases her annual report for 2021/22.

The report provides an overview of Emily Spurrell’s activities and key successes activities from when she took post in May 2021 until the end of the financial year in March. It covers the recruitment of 160 new police officers, securing £4m of extra funding for the region and major campaigns focused on preventing sexual violence, domestic abuse and hate crime.

It also details the progress against the priorities set out in her Police and Crime Plan and shines a spotlight on some of the key projects being undertaken to increase the safety of people and communities in Merseyside including Safer Streets initiatives, the You’re Safe Here scheme and the Domestic Abuse Workplace scheme.

Despite the challenges posed by the pandemic, during her first 11 months in post the Commissioner and her team have met with more than 10,000 members of the public and partners across Merseyside, attended 373 community meetings and consulted more than 4,000 people. She’s used the 54-page report to thank everyone for their support and reaffirm her determination to use the rest of her term to deliver much more.

Emily is required by law to produce an annual report. She has unveiled the final version today after presenting it to the Police and Crime Panel, they body which scrutinises her work. Panel members, who had previously provided feedback on a draft version of the report, formally endorsed the document.

Emily Spurrell said: “I’m pleased to be able to release this extensive report which reflects on my first 11 months in post and all the work which has been undertaken to build a stronger, safer Merseyside.

“It’s been a fascinating, busy, productive, and sometimes challenging time. I’ve loved every minute serving the communities of our fantastic region and there’s no doubt, the best part has been meeting so many people, listening to their views and hearing what more we can do, working together, to make them feel and be safer in our region.

“There’s been some unexpected challenges – taking office during a global pandemic, the spiralling cost of living crisis and, in particular, the awful terrorist incident outside the Liverpool Women’s Hospital - but there have also been so many highlights.

“The ranks of Merseyside Police have now swelled with 665 new police officers – meaning the force is in its strongest position for a decade. I’ve set the policing and crime priorities for our region and worked to make the scrutiny of policing locally more transparent and public than ever before – so local people can see for themselves the progress we are making and get an insight into the determination shared by the Chief Constable and myself to make our region as safe as possible.

“More than £4m of extra funding has also been secured and invested directly into key initiatives preventing crime in hotspot areas and providing specialist support for vulnerable victims of crime, the results of which are already being seen and felt in communities on Merseyside and major campaigns have been delivered focusing on the issues which matter most to our communities.

“I’d like to thank everyone who has supported and worked alongside me to deliver all these important initiatives and projects. There’s such a commitment across our region to preventing crime, supporting the vulnerable and improving the safety of our communities. There’s much more still to do and I am determined to waste no time - the work detailed in this report is just the beginning.”

The report, which has been produced as an interactive PDF, includes infographics and case studies illustrating the Commissioner’s work including how she engages with the communities of Merseyside, holds the Chief Constable to account, and delivers the Victim Care Merseyside service, which provides support to help vulnerable victims of crime to cope and recover.

The report gives both the Panel and the public the chance to review and appraise her progress in delivering her police and crime priorities and your feedback is very welcome. Please contact us to provide it.