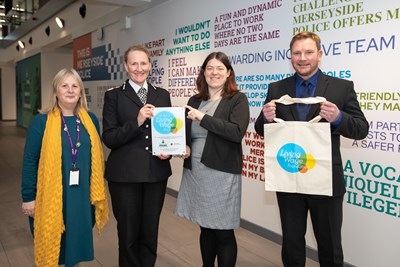 Merseyside Police and the Office of the Police and Crime Commissioner have both been officially accredited as Living Wage employers.

Today’s announcement comes after a shared commitment by the Police Commissioner Emily Spurrell and Chief Constable Serena Kennedy to ensure all staff receive the real living wage as a minimum.

The UK Living Wage is voluntary and is calculated independently every year by the Living Wage Foundation based on what people actually need to live on, including fuel, energy, rent and food.

The accreditation will ensure everyone currently working across both organisations receives a minimum hourly wage of £9.90 – higher than the government’s current minimum for over 23’s, which stands at £8.91 per hour and will increase to £9.50 in April.

“I’ve been committed to ensuring all our staff take home a fair day’s pay for a hard day’s work since my time as Deputy Police Commissioner. We took the decision back in 2018 that we wanted to ensure all staff were paid at that level, leading to nearly 100 employees having their salaries increased.

“I am delighted that we have now received this nationally-recognised standard which demonstrates our shared commitment to ensuring all our staff earn a decent wage which they can afford to live on now, and into the future.

“Our employees are extremely dedicated and professional, and signing up to the Living Wage is an important way for us to show we value the people who work for us and those who support our work through our supply chain.

“Fair pay at work doesn't just help our employees, it is also good for the regional economy too - boosting businesses throughout Merseyside.”

Chief Constable Serena Kennedy said: “I believe we should absolutely do everything we can to ensure that our lowest paid staff receive the real living wage, it is one of many ways to show our appreciation for the roles they do and so I hope it inspires other organisations to do the same.

“In the last few years, the force has faced increasingly hard and challenging times. Being accredited as a Living Wage employer is hopefully a timely and welcome boost for the force and acts a key way to demonstrate our commitment and the value we place on looking after all our staff, who as our biggest asset, deserve to be paid a fair and appropriate income.”

Unison Assistant Branch Secretary Anne McIntyre said: “Unison have campaigned and will continue to campaign for a real living wage for employees and for all employees of suppliers and contractors used by Merseyside Police.

“On behalf of our members Unison would like to pass on our appreciation to both the Police and Crime Commissioner for Merseyside and the Chief Constable for their shared goal and achievement that Merseyside Police are now an accredited Living Wage Employer.”

GMB Branch Secretary for Merseyside Jeff Sheeran, said: “GMB has consistently called for a real living wage for employees in all sectors throughout the UK. On behalf of our members GMB commends both the Police and Crime Commissioner for Merseyside and the Chief Constable for their shared commitment to achieving the accreditation as a Living Wage Employer which is a real step forward.”

Across the North-West, nearly a quarter of all jobs still pay less than the real Living Wage – around 584,000 jobs.

Laura Gardiner, Director, Living Wage Foundation said: “We’re delighted that Merseyside Police and the Office of the Police and Crime Commissioner have joined the movement of over 7,000 responsible employers across the UK who voluntarily commit to go further than the government minimum to make sure all their staff earn enough to live on.

“They join thousands of small businesses, as well as household names such as Burberry, Barclays, Everton Football Club and many more. These businesses recognise that paying the real Living Wage is the mark of a responsible employer."

The real Living Wage is the only rate calculated according to the costs of living. It provides a voluntary benchmark for employers that wish to ensure their staff earn a wage they can live on, not just the government minimum. Since 2011 the Living Wage movement has delivered a pay rise to over 250,000 people and put over £1.3 billion extra into the pockets of low paid workers.

About the Living Wage

The real Living Wage is the only rate calculated according to what people need to make ends meet. It provides a voluntary benchmark for employers that choose to take a stand by ensuring their staff earn a wage that meets the costs and pressures they face in their everyday lives.

On Monday 15th November 2021, the UK Living Wage rose from £9.50 per hour to £9.90. In London, the Living Wage rate will increase from £10.85 to £11.05 per hour to reflect the higher costs of transport, childcare and housing in the capital. These figures are calculated annually by the Resolution Foundation and overseen by the Living Wage Commission, based on the best available evidence on living standards in London and the UK.