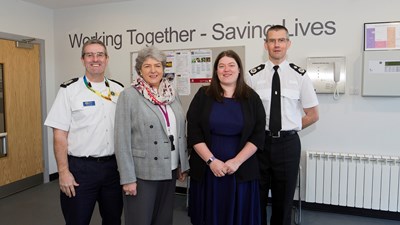 Merseyside’s Police Commissioner and her Deputy have joined police and fire service partners to take a tour of the new state-of-the-art shared Community Fire and Police Station in Prescot today.

The purpose-built facility, situated at the junction of Manchester Road and Cables Way, officially opened its doors in January and now houses both the town’s firefighters and the local policing team, as well as providing meeting space for voluntary and community organisations.

The shared station was the result of collaboration between the Police and Crime Commissioner, Merseyside Police, Merseyside Fire and Rescue Authority and Knowsley Borough Council with the aim of providing modern facilities to serve the public as efficiently as possible. Preparation work began on the site in November 2016 and the station is now fully operational.

Today, the Commissioner, Jane Kennedy, and her Deputy, Cllr Emily Spurrell, joined with Merseyside Police’s Deputy Chief Constable Carl Foulkes, and the Deputy Chief Fire Office, Phil Garrigan, to take a guided tour of the new station and meet the teams who are now using the premises to serve the local community.

Jane said: “I am delighted to see this new station is now up and running, bringing the police and fire teams which are serving the people of Prescot together to provide an even better service for local communities.

“This state-of-the-art community station is another example of our shared commitment to working together to save money and increase efficiency and effectiveness.

“Creating a network of visible and accessible Community Police Stations, which are co-located with partners in busy neighbourhood hubs serving local people, was an integral part of my 10 year plan to modernise and improve Merseyside Police’s stations. I’m pleased to see these plans come to life and I hope this new shared station will be an asset for residents in Prescot.”

Community Police Stations are designed to be smaller in size, but accessible bases which will enable neighbourhood officers and PCSOs to work in the heart of the communities they serve. They will be opened on a regular, but not continuous basis and will include public meeting rooms and facilities from which officers can parade on. They will not house any custody suites or cells.

Merseyside Police’s Deputy Chief Constable Carl Foulkes said: “Our ‘One Team’ approach means that everyone in Merseyside Police, and our partners, are working together to reduce crime and protect our communities while bringing together a broad range of skills and capabilities.

“The new shared Community Fire and Police Station in Prescot will allow us to work closely with our partners while being visible in our neighbourhoods and most importantly allowing our staff to spend more time in the communities they serve.”

With three fire engine bays, the 1,377m2 station has modern training facilities, including a drill tower which can be used to simulate and practise different types of roof rescue - and two rooms available free of charge for use by community groups.

As well as firefighters, the station will house arson prevention teams from Huyton and St Helens and the Prince’s Trust will run courses from the station. Facilities including the kitchen, dining area and gym will be shared by the emergency services, helping to support collaboration. Hundreds of bushes and small trees were planted and a number of bird boxes put up to safeguard on-site wildlife.

The two-acre site was chosen for the merger of Huyton and Whiston fire stations as it enables an equitable emergency response cover to both areas, with fire crew providing a 24-hour response. This is the first time since 1946 that Prescot has had a fire station.

Merseyside Fire & Rescue Service Deputy Chief Fire Officer Phil Garrigan said: “We are delighted that Prescot Community Fire and Police Station is now up and running. Our fire crew and fire prevention teams are settling in at the location.

“The purpose-built station – which is equipped with modern facilities - is a fantastic base for us and the local police. It also serves as a space for community groups to use on a regular basis.

“The station enables us to work alongside Merseyside Police, serving the community as effectively and efficiently as possible, and has been sited to ensure the best possible response within South Knowsley.”

Merseyside Fire & Rescue Authority secured the site from Knowsley MBC, and the Ministry for Housing, Communities and Local Government assisted with costs with a £1.7million grant. The building was constructed by Wates Construction.

Wates Construction was appointed to build the station via the North West Construction Hub, a procurement body designed to save time and money in the delivery of public sector building work in the region.