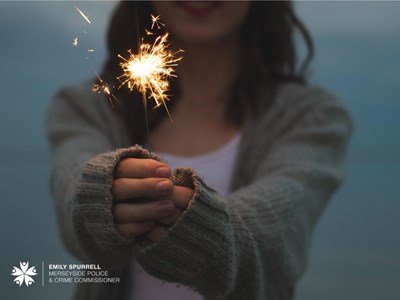 Merseyside Police and Merseyside Fire and Rescue Service (MFRS) are encouraging young people, families, and businesses to play their part in keeping our communities safe over the Halloween and Bonfire Night period.

Working alongside the Police and Crime Commissioner, North West Ambulance Service, local authorities, Trading Standards and Merseytravel, we will be out across Merseyside to ensure that people can enjoy themselves safely.

Officers are also warning anyone who commits incidents of anti-social behaviour to expect a swift response, and for everyone young and old to be mindful of the effects such behaviour can have on our most vulnerable.

Several organised public firework displays have been cancelled across Merseyside, and we are reminding people of the laws around fireworks and urging people not to attempt to hold their own public displays, as well as highlighting all the activities still on offer.

Last year, there was a 29% decrease in incidents of criminal damage, compared to the same period in 2019. However, incidents of anti-social behaviour increased by 17%.

Chief Inspector Peter Clark, who is heading this year’s operation for Merseyside Police said: “Many of the planned firework displays and events we normally attend will not be happening this year. We know how much people enjoy such events, but it is imperative that people don’t attempt to hold their own unofficial and illegal public displays.

“You can be fined up to £5,000 and imprisoned for up to 6 months for selling or using fireworks illegally. You could also get an on-the-spot fine of £90. So don’t take the risk and go and see what events are available in your area, both around Halloween and Bonfire Night, as there is plenty happening for all ages to enjoy this year.

“We will maintain a common-sense approach during the Halloween and Bonfire night period, but our message regarding anti-social behaviour remains simple – it will not be tolerated and anyone caught committing this type of offence will be dealt with firmly and robustly.

“No one should have to suffer being the victim of anti-social behaviour and I would like to reassure everyone that there will be extra high-visibility patrols during this time. This will be one of the busiest periods for the emergency services, and there are some steps we can all take to make things easier.

“Bring your wheelie bins in, as well as those of anyone elderly or vulnerable where you live, which is a simple way to limit the opportunities people have to recklessly set them alight, which can have devastating consequences.

“We know the vast majority of young people have respect for other people and their property, but we know the behaviour of some can go beyond fun, and the impact it can have on others can be more than those involved realise.

“There could be serious or even fatal consequences for young people throwing or attempting to light fireworks in public, and throwing objects at houses, cars and shops.

“I would urge those young people who may be considering behaving in an unacceptable way to think about what you are doing and how you may make other people feel. How would you feel if a member of your own family was too frightened to leave their own home or walk down the street? Under no circumstances is it ok to throw things at people or their homes, commit criminal damage or abuse or intimidate people.

“There are so many more worthwhile things to do at this time, so have a look at events and activities where you live.

“The support of parents and guardians is also vital at this time of year. Together, we can minimise the risk - don’t let children hang around the streets with nowhere to go and understand who they are with and what they are doing.”

Shopkeepers are also being urged not to sell any items that can be misused to cause damage, such as eggs, flour and cans of shaving foam as well as ensuring fireworks are not sold to under 18s.

Damage caused by used by Halloween ‘tricks’, such as throwing eggs and flour, or any objects at windows, doors, cars and people is a criminal offence and it is also illegal for those under the age of 18 to buy, carry, or use fireworks. Under the Explosives Act of 1875 it is also illegal to let off or throw a firework in a public place.

He continued: “Anyone involved in criminal behaviour could be arrested and receive a fine, a criminal record or even jail time. If your child is under 16 then you will be liable for payment of any such fine.

“By taking some simple steps it could prevent that knock on their door from a police officer informing them that their child has been arrested or, worse still, has been involved in a serious accident.”

Paul Kay, Group Manager from Merseyside Fire & Rescue Service, said: “We would like to everyone to enjoy the bonfire period as safely as possible. If you do have a bonfire at home, make sure there is enough room to do so and ensure that bonfires are well clear of anything that could catch fire such as trees, bushes, fences, sheds or gazebos. Fireworks should only be used by a responsible adult and they must follow the Firework Code at all times.

“Deliberately started fires on the run up to bonfire night are a huge drain on already overstretched fire service resources. What may seem like a bit of harmless fun to some can have life changing consequences and puts entire communities at risk. If firefighters are responding to a wheelie bin fire or illegal bonfire, it prevents them from responding to another incident. Please have a conversation with your children about right and wrong.

“You can help to reduce the number of incidents this bonfire period by never giving combustible materials to anyone, especially young people, and making sure your wheelie bin is out of sight – only put it out on collection day and bring it back in in as soon as possible.

“We would urge people on the run-up to bonfire night to report any combustible material that could be used for deliberate fires via our website www.merseyfire.gov.uk, by calling 0800 731 5958 or via our social media pages.

“Last year, MFRS staff were attacked eight times over the bonfire period. This kind of behaviour will not be tolerated. It's not fun to attack firefighters. An attack on fire crews is an attack on your own community. Don't ruin your own or someone else's future. All fire engines carry CCTV cameras and footage will be passed on to Merseyside Police. Please think twice and remember, actions have consequences.”