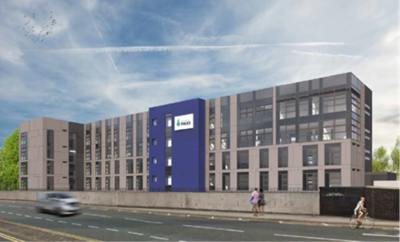 The ceremony will mark the completion of steel work for the additional floor which is being installed as part the major refurbishment project at the station, which got underway in February. Once the steel is installed, work can begin on kitting out the police base which will now boast six floors and be able to house additional staff and facilities.

St Anne Street, which first opened for business in 1972, is in an important strategic location, attached to Merseyside Police’s busiest custody suite and next to the force’s state-of-the-art new headquarters, Rose Hill. Once completed it will boast a similar façade to Rose Hill, helping to create a ‘campus’ feel across the site, as well as being much more sustainable and economical to run.

It is expected the renovated station will be ready to re-open for business in May 2023 and will house teams including Local Policing, Protecting Vulnerable People, Investigations and Fingerprints.

Once all staff have migrated back across, the PCC and Chief Constable will be in a position to release Merseyside’s Police former headquarters in Canning Place and Smithdown Lane Station, both of which are currently accommodating staff from St. Anne Street.

The major renovation project is part of a 10year plan designed to help Merseyside Police save approximately £250,000 a year on its running costs.

“This station has faithfully served Merseyside Police for more than 50 years, but sadly it was in a poor state of repair, out-dated and becoming very costly to run. It was estimated it needed at least £3.6m of repairs just to keep it running.

“This major refurbishment project was long overdue. It will help to ensure St Anne Street is fit and future-proofed to serve officers, PCSOs and staff and our communities for many years to come.

“Our police service needs modern facilities and equipment which will make them as effective and efficient as possible. The refurbishment of St Anne St is yet another example of the determination the Chief Constable and I share to provide the officers and staff of Merseyside Police with the best possible facilities to help them fight crime now and into the future.

“Today is also an important day for the teams of designers, architects and builders who have been working so hard on this project since before planning permission was even granted and my thanks go to them for helping us to get to this point today.

“I can’t wait to visit St Anne Street once it is ready to open its doors for business again.”

Chief Constable Serena Kennedy said: “The refurbishment of St Anne Street police station puts the force right back at the heart of the community, with a modern building that is affordable and sustainable. It is vital that our officers and staff can work in buildings that are fit for purpose and suitable for policing in the 21st century.”

The money for the project has been part funded by capital specifically set aside for the Force’s buildings and part borrowed from approved sources, in accordance with the Prudential Code for capital finance. This money is completely separate from the funding used to pay for Merseyside’s Police’s officers and staff and cannot be diverted to fund operational policing.

All the money saved on the cost of running St Anne Street Police Station will be directed straight into frontline policing.

As part of the PCC and Chief Constable’s commitment to social value, more than 50% of the workforce and resources deployed on the project have come from within Merseyside. In addition, nine apprentice jobs have been created.

Plans to first refurbish St Anne Street were approved in January 2021. Following the approval of a planning application in February, ISG were appointed as the principal contractor on the project.

ISG’s Framework Manager Paul Collins said: “Today marks a key milestone in the journey of St Anne’s Street police station. With the construction of the steel frame now complete the next phase of the project can begin, bringing this state-of-the-art facility to the local community.

“We’re proud to be a part of this vital refurbishment, delivering strong sustainability credentials to futureproof it once operational all while meeting crucial social value commitments during in its delivery. Ensuring it remains a true community pillar throughout its redevelopment and for years to come.”